Perry Park is located at 4900 Fairview Drive, behind Highland Park Elementary.  It is the only official City of Austin park within the HPWBANA boundaries.  Highland Park Elementary teachers and children use the park frequently, and is also enjoyed by adults and their pets. The neighborhood association and PTA use Perry Park for various events as well, including a movie in the park night. 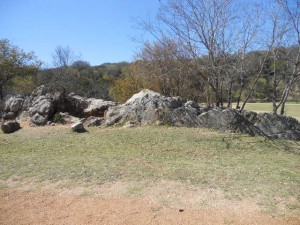 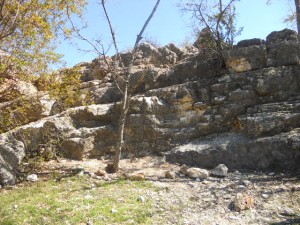 Perry Park was once a limestone quarry and evidence of past geological events are visible for those who want to explore the rocks exposed in the park. Tens of millions of years ago, much of Texas was covered by an ocean (ancestral Gulf of Mexico).  Extensive faulting, in the period 5-20 million years ago, caused earthquakes and shaped much of Central Texas. The Balcones Fault Zone (BFZ) extends from Dallas to Del Rio, passing right through Austin and forms the prominent topographic divide between the Hill Country, to the west, and the Coastal Plain, to the east. In a relative sense, the Hill Country was uplifted, while the Coastal Plain was dropped. The last significant movement along the BFZ was over 5 million years ago.

Perry Park is on the western border of the BFZ.  The tilted rock layers visible in the bluffs at Perry Park are the result of these layers being broken and twisted during the faulting process. If you follow a specific rock layer and then notice a break & offset in the layer, you are looking at one of the countless faults that make up the BFZ. You might also find rock surfaces with many parallel shallow grooves. These are the slickensides (“scratches”) formed when two rock layers rubbed against each other during the faulting process. The rock exposed in Perry Park is the Edwards Limestone, formed about 100 million years ago, and the same limestone that forms the Edwards Aquifer – a very important water source across much of Central Texas.

There are numerous geologic points of interest in the Austin area, including: the topographic prominence we call Mt. Bonnell – caused by the Balcones Fault Zone or the long, inactive volcano south of the airport, off to the west of Highway 183, called Pilot Knob or the Barton Springs, where the Edwards Aquifer flows out onto the surface.

Many thanks go to the Austin Geological Society, www.austingeosoc.org, which provided this information.  Their website contains information, guide books and field trips for those who want to learn more.